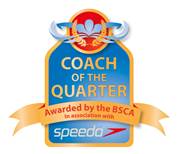 The BSCA are well known for recognising coaching achievement at a National & international level, but now, in partnership with Speedo, the BSCA is to recognise a coach every three months, with their RELAUNCHED “Coach of the Quarter” award.

“Coaches can be nominated for almost anything,” says Brian McGuinness, BSCA Executive Director, “we may recognise those who exhibit good practice, or where they have been involved in initiatives which have forwarded the profession or activity of swimming coaching as well as relative outstanding results of course.”

The Awarding Panel will consider innovation and all sorts of contributions to the sport.

Terry Denison MBE, the BSCA Chair said in support of the Award, “We want to encourage coaches at all levels of our sport, to be innovative & ground-breaking and not just doing what everyone else is doing.” Denison who coached Adrian Moorehouse to Gold in the Seoul Olympics amongst many other achievements, went on to say, “We are pleased to have a body such as Speedo associated with this initiative and we thank them for their support on this and in other areas too.”

Charlotte Ayres, Speedo UK Sports and Trade Marketing Executive says “Speedo, the world’s leading swim brand is pleased to be a key partner in the Coach of the Quarter recognition award. This award recognises the hard work and commitment coaches provide from grass route to elite level, in the nurturing and development of aquatic stars of the future”.

Anyone can nominate their favourite coach via this website online by clicking on the Coach of the Quarter logo on the homepage or going to http://www.gbswimcoaches.co.uk/quarterly-nominations/ or by downloading the form (attached) , filling it in and sending to the BSCA Office at the address shown on the website or by email at info@gbswimcoaches.co.uk.

The successful coach will receive commemorative engraved glassware and a £50 voucher from Speedo.

To mark the relaunch, we are giving away TWO awards from nominations received in July 2014 and will be announced soon thereafter on this website, on Twitter & Facebook.

Water Festival interest to be registered by clubs by…

The Birmingham Swimming Action Group (SAG) is made up of volunteers from various clubs based across the City of Birmingham, who have come together to promote all types of Aquatic sports.